Story structure is crucial. In fact, it doesn't really matter how many CGI effects there are in a film; if the structure is lacking, we walk away feeling cheated. All great films adhere to structure. And as I've written before, the structure that I have seen in all great films (and even novels) is from the Blake Snyder book Save the Cat! The Blake Snyder Beat Sheet helps break down stories in all genres, and it demonstrates why movies resonate with us the way they do. In fact, whenever I watch a movie now, my mind starts to subconsciously break it down.


After watching one of my favorite films of the year, The Muppets, I saw how even this family-fun film adheres to the principles of great storytelling. Perhaps this is why the film resonated with audiences so well. And so below, I have broken the film down according to the Blake Snyder Beat Sheet, which I feel is one of the most effective story structures I have ever come across. The funny thing I noticed is that many of the big "beats" were revealed through musical numbers. So read on, but beware, though, if you have not see the movie: there are spoilers ahead, and this is definitely a film to see on your own first to experience its magic.
﻿﻿﻿﻿﻿﻿﻿﻿
﻿﻿﻿﻿﻿﻿﻿﻿

Note: This blog post is not officially authorized by the folks at Blake Snyder Enterprises. To check out this fantastic book series, go to the official web site or to Amazon.com.

Opening Image: The movie opens with a montage of old, grainy family filmstrips. We meet Walter, the main character of the film, also a Muppet. He lives with his brother Gary, and the two are best friends. We learn through the filmstrip that Walter and Gary truly bonded after they discovered The Muppets and began watching that every night.

Theme Stated: Walter and Gary are very close and do everything together, and are eveb preparing to take a trip together with Mary, Gary's girlfriend, for their ten-year anniversary. As they walk down the street, they sing a song, the chorus of which declares, "Life's a happy song when there's someone by your side to sing along." This is what the movie is about, and what the characters will discover: who is important in our lives, and how are we incomplete without them?

Set-Up: We learn from the flashbacks that Walter has always struggled with his identity, and that Gary has always been there by his side. Living in Smallville, Kansas, Gary stays by Walter's side, even at the expense of his relationship with Mary. Mary doesn't mind it when Walter is invited to tag along on their trip to Hollywood, but secretly she wants some time with Gary where Walter won't be there. Even so, she cares about Walter and his obsession with the Muppets. As the three characters prepare to leave for Hollywood (finishing their musical number, of course), we learn a little bit about the small town they hail from. This is where Walter's journey begins... but will it end here?

Catalyst: While on a tour of the now-defunct Muppets studio, Walter sneaks into Kermit's old office. While there, he overhears Tex Richman's secret plan to tear down the Muppet theater. The oil baron knows there's oil under it... he can smell it (plus the geological survey confirmed it). Walter realizes that the stakes have just been raised on his vacation. He must find Kermit and try to save the theater.

Debate: Walter tells Gary and Mary about what he overheard, and they discuss what to do. Can they find Kermit in time? Will he listen? The three finally find his Bel-Air estate, and share the information with him. Kermit doesn't think he will be able to bring the gang back together, let alone raise the ten million dollars to keep the theater. Reminiscing about the past, Kermit decides that he will at least try. In a throwback to the first Muppet film, they go on a driving montage to try and convince the other Muppets to come back, joining together in an effort to save the Muppet Theater. We see the doubts of Fozzie, who has found a new career with the Moopets, and Gonzo, the reluctant plumbing magnate who owns a fantastic executive line of used toilets. Ultimately, though, they decide to join Kermit and the other characters.

Break Into Two: After a little effort and a lot of driving, we see that the Muppets are back together. Walter and his friends enter a world that is completely the opposite of his previous life. In the beginning of the story, we saw the thesis of his old world. This one is his antithesis, the "backwards" world for him.

B Story: Not everyone's back, though... there's still the touchy subject of Miss Piggy, Kermit's romantic interest. The gang finds her in Paris, and the flame is rekindled between Kermit and Piggy. However, there is some animosity there. Something's not right. She refuses to come back. At the same time, there is another B story that revolves around Mary and Gary's relationship. Mary wanted to go on a vacation to celebrate her anniversary with Gary, but instead, it has turned into helping Walter once again. Will she ever have Gary to herself? 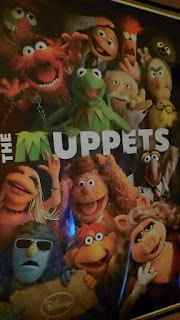 Fun & Games: Now that the gang is back together, they need to find a
way to save the Muppet Theater. The fun and games begin with the "promise of the premise." This is a Muppet movie, so we expect to see a lot of fun antics, songs, and zaniness. And the film certainly doesn't disappoint. We watch them struggle to put their act together, to find a way to raise the money via a Muppet telethon, and indulge in a bit of nostalgia along the way. They even find a replacement for Miss Piggy, the Moopet Miss Poogy, though she seems a bit "rougher around the edges." But alas, as they plan and practice, it seems that they need more to make this work.

Midpoint: Finally, though, Miss Piggy comes back, deciding to help the gang, even though there is still some animosity toward Kermit, who won't admit that he needs her to make it all work. It seems like a victory, though it's a "false victory," for we know that Tex Richman is not going to give up in his quest to get the property from the Muppets. The day for the telethon is closing in quickly, and a "time clock" appears that raise the stakes.

Bad Guys Close In: Rehearsals aren't going so well. They're short an act, Kermit can't seem to find a celebrity guest host, and everything seems to be closing in on them. The network executive appears and watches the show rehearsals, and says that if Kermit can't find a celebrity guest host, she will not air the telethon. Walter is unsure of where he fits in; Kermit asks him to do an act for the show, but he doesn't think he has any talents. Kermit is neglecting Piggy, who refuses to work with him, and Gary is so devoted to helping the Muppets that he doesn't do any of the sight-seeing with Mary that he had promised. Miss Piggy's and Mary's musical number "Me Party" sums up the BGCI section well. Unless something happens, all will be lost...

All is Lost: ... and it is. Unable to find a guest host, Kermit resigns to the fact that the theater can't be saved. He appeals to Tex Richman's softer side, finding that it doesn't exist. The theater is gone. To make matters worse, not only will Richman get the rights to the theater, but also to the Muppets' name. The "whiff of death" is in the air as Kermit and friends watch the death of their name and of their close-knit family. At the same time, Gary is so committed to helping Walter that he misses the anniversary dinner with Mary, who leaves him a note at the motel saying she is going home to Smallville. The A story of saving the theater crosses with the B story, and there is another "whiff of death" as Gary fears that his relationship with Mary is gone.

Dark Night of the Soul: Kermit resigns to the fact that his dreams are finished. He's depressed and has given up, and his friends can sense it. The "victory" at the Midpoint was indeed false. Walter and Gary also have a Dark Night of the Soul. Gary sings in response to Mary's note, "Am I a Man, or am I a Muppet?" Walter, too, searches for his own identity, joining Gary in the song. Both are questioning where they find themselves.
Break Into Three: Ultimately, at the end of the song, Walter and Gary make their decision. They have a sense of self-identity, and they know what they need to do. Miss Piggy also knows what she needs to do: at all costs, she must find a celebrity host for the telethon. Resolved in this endeavor, they kidnap Jack Black. The A story and the B story finally meet as Walter discovers his destiny, Gary goes to Smallville to reunite with Mary, and the Muppets try to save the theater.

Finale: With a celebrity guest host, the show can go on! The Muppets put on a show that seems like it will fail at first, but slowly gains more success, and the calls start to pour in. Kermit reconciles with Miss Piggy, finally admitting that he needs her, and together they perform a rendition of "The Rainbow Connection" involving all the Muppets. It looks like they may be able to save the theater after all! Walter even performs an act at the end, discovering his talent after some prompting by the newly-returned Gary (traveling by map, of course). Tex Richman tries to thwart their efforts, and succeeds as the Muppets do not make the goal. In the end, they lose the theater, as well as their name. As they leave, Kermit addresses the group, saying that as long as they're together, it doesn't matter that they failed; they failed together. As long as you're with those you love in life, that is all that matters.

Final Image: As they leave the theater, defeated, they are greeted by throngs of fans. The theme comes full circle as we achieve synthesis: they sing a reprise of "Life's a Happy Song," demonstrating that togetherness is what matters most.
Posted by C. David Milles at 2:36 PM

C. David Milles
I am an author of young adult novels and a middle school teacher. I find that both go together pretty well. Daily, I get to work with the audience I write for and get their feedback on my ideas.