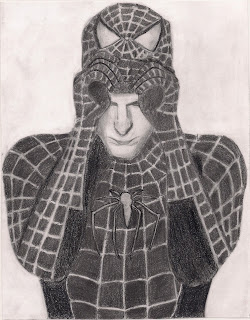 The Ordeal stage of the Hero's Journey has always been one that I've struggled with. According to Christopher Vogler's book The Writer's Journey, this is the stage where the Hero is in the Inmost Cave, where they face death. It's where the Journey could possibly end in disaster. If the Hero survives, they will have a renewed sense of purpose. I had always tried to relate the Ordeal to the climax of a story, but I knew something was "off." Vogler writes that the Ordeal is more of a "central crisis." In his book, he demonstrated that this stage typically happens in Act II. And this is where I have had to do some re-thinking.

Honestly, I lost sleep over it. I've found it effective to use the Blake Snyder Beat sheet from his book Save the Cat! to help see the structure more vividly. And so as I lay awake in bed one night, I tried to think about what beat best exemplified the Ordeal of the Hero. And at about midnight, it finally hit me.

I think the Ordeal usually is best seen toward the end of Act II, and in Blake Snyder's breakdown, it's close to the All Is Lost moment. The Ordeal is typically where the Hero experiences death of some sort. It could be physical, symbolic, or even a fear. But it's a major step for them to overcome if they are to prove that they're worthy of finishing the Journey. It's the "ultimate test." Of course, it might fall somewhere within the end of Snyder's "Bad Guys Close In" beat or even the "Dark Night of the Soul," but it's there.

As soon as I realized this, it made sense. Usually, the Ordeal represents the Inmost Cave, the place where the Hero faces death or their fears. And so we usually see this moment in some kind of enclosed space to represent the Cave. For Indiana Jones in Raiders of the Lost Ark, it is the Well of Souls, where Indy faces not only death and the end of his Journey, but also his worst fear... snakes. In Iron Man, the Ordeal is when Tony Stark learns that his business partner, Obadiah Stane, has betrayed him. He temporarily paralyzes Stark and removes his "heart," a sure sign of death. If these Heroes survive, they will be further committed to the Journey.

When the Hero receives their Reward and survives, they recommit themselves to the Journey. This is the Road Back. As Blake Snyder would see it, this is the Break Into Three and the beginning of the Finale. It is through the Finale, during the climax, that we see the Hero Resurrected. It's where the Hero digs deep down to show what he has learned.

Having realized this, I knew that I needed to revise some of my Hero's Journey posts But at least now I have a better understanding of the Journey and a larger appreciation for all it entails.
Posted by C. David Milles at 9:27 PM

C. David Milles
I am an author of young adult novels and a middle school teacher. I find that both go together pretty well. Daily, I get to work with the audience I write for and get their feedback on my ideas.